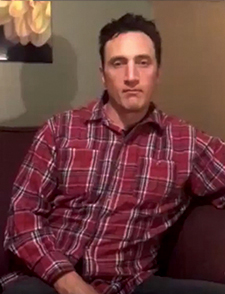 You may know him as Cyrus from Canada’s infamous Trailer Park Boys, but there is much more to Bernard Robichaud than his signature look complete with leather jacket, shades and red 1979 Corvette.

In 2017, Bernard was told that he is the one man in seven living with prostate cancer in Canada. In fact, it was a doctor friend and golf partner who called Bernard into his office to break the news.

“I’m thinking, ‘That’s an odd way to book a tee time,’” says Bernard from his part-time home in the Maritimes. “I had no symptoms, didn’t have a clue this could happen to me. I didn’t even know what a PSA test was.”

Being an active, healthy man at 57 years young, Bernard’s diagnosis left him with lots of questions.

“You think you’re taking care of yourself, and then it gets you,” Bernard says. “I’ve always taken care of my body – my career forces me to do so. I always played sports, I eat well, exercise… why did this happen to me? You see others who don’t live as healthily as I do and just wonder, what happened?”

Now, Bernard is using his platform as a comedian and actor to create awareness of the cancer that takes 4,200 Canadian men every year.

“It’s the least I can do,” he says. “It’s a difficult thing for men to discuss, but I’m happy to share my experience with others. Even if I just reach one set of ears, it’s one life I may help save.”

Bernard also believes men should be open about sexual side effects after surgery. “A young guy like me doesn’t expect to have to deal with things like that,” he says. “You can take a pill – that may or may not work – and because people see it as recreational, you have to pay for them at full price.”

He’s been touring for seven years as a stand-up comedian, and using the stage to talk about prostate cancer. “I’m writing about my diagnosis and treatment to share jokes and make it lighthearted.”

His experience includes shopping for reusable underwear and finding stains in his pants after sneezing or laughing, as a result of dealing with incontinence after surgery to remove his prostate.

“There’s gotta be a better way! How many pairs do I need in a day?” He jokes. “The women’s stuff looks way better.”

Bernard will be wearing Plaid for Dad the Friday before Father’s Day to show his support for other Canadian families facing prostate cancer.

“Going Plaid for Dad is one of the easiest and best ways you can show your support for the one in seven Canadian families who will face a diagnosis. Join me and go plaid with your own bad selves!”