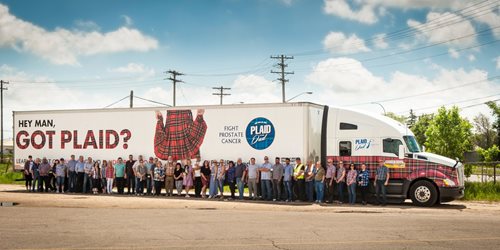 It’s impossible to talk about the success and efforts of the thousands of workplaces across Canada who donned plaid without recognizing the Canadian trucking industry. As part of Trucks for Change, members roll out in full force to protect dads from prostate cancer.

“The trucking industry traditionally has a lot of men within the ages that Prostate Cancer Canada* tells us are affected. Unfortunately, just through the demographics of our truck drivers, mechanics, and people who work in the industry, I believe we have a proportionately high rate for this disease,” says Pete Dalmazzi, President, Trucks For Change. “It’s a natural fit for us to support as it affects so many people in our industry.”

Of course, a company that has stood out year after year is Arnold Bros. Transport Ltd., which was awarded with the coveted Plaid Vest in 2018 as the National Workplace Champion. Raising nearly $20,000, the team ran BBQs, 50/50 draws, bake sales and even designed a plaid hat for their team to wear.

“The campaign started to just take on a life of its own as the events were happening,” says Carla Kaneski from Arnold Bros. Transport Ltd. “We wore plaid on Fridays and encouraged people to wear plaid ties, scarves or socks on Tuesdays. Fred Arnold, our President, also makes a donation for every mile we run on Father’s Day.”

A highlight for Carla was the 2019 Kenworth tractor that was specially wrapped in plaid. Last year, they wrapped a trailer. “Knowing the attention the tractor and trailer have received hauling down the highway is such a great feeling, as it is the awareness we want for this campaign. An awareness that will travel down the highway, spreading the word for next year,” she says.

It wasn’t just Arnold Bros. Transport Ltd. that made a splash in Plaid: more trucking companies showed their support in 2018 than ever before.

Plaid for Dad is especially important to James Steed, President of Steed Standard Transport, who has worn Plaid for Dad since 2016, in honour of his dad who is a prostate cancer survivor. His team ran raffles, BBQs, matched employee donations and encouraged suppliers and friends to donate. James has also been known to wear plaid kilts to show his support.

“Our industry is traditionally male-dominated and we were really drawn to the campaign from the awareness aspect and the chance to highlight the importance of men’s health issues,” says Cheryl Levy Smith of Midland Transport. “Our employees are very giving and proud of their communities and charities that we support so everyone was excited to be involved. It was a great way to see the creativity of the plaid attire and teams dressing to compete for prizes for ‘Best Dressed.’”

Ken Rosenau, President of Rosenau Transport was quick to participate when he heard about Plaid for Dad at a conference. “I put my hand up right away as I have had family members near and dear to my heart who have prostate cancer,” he says. Rosenau’s fundraising BBQs include team members, vendors, customers and anyone else in the community who wants to have a burger and donate.

Perhaps one of the most creative fundraising initiatives in the trucking industry was Tandet’s Beard Off. “We are an industry populated very highly by people with families. This is a man’s direct issue, but when the disease strikes, it affects more than just the man,” says Scott Tilley, Co-President of Tandet Group. “We want our people aware and to support a good cause for themselves, as well as their dad, friend, husband and partner.”

*On February 1, 2020, Prostate Cancer Canada amalgamated with the Canadian Cancer Society, bringing together two organizations working toward a common goal – a world where no Canadian fears cancer. This transformational partnership is a bold and critically needed step forward within the cancer charity sector in Canada. Prostate Cancer Canada’s important work in addressing prostate cancer in Canada will continue as part of the Canadian Cancer Society.