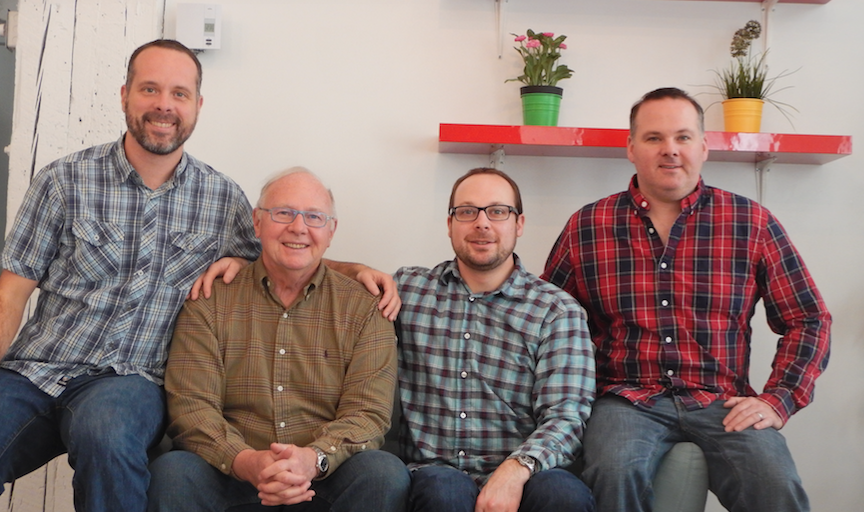 When Evan Hickey learned that his father, Bob, had been diagnosed with prostate cancer, he was shocked – left with what he describes as “a very surreal feeling”. That was in 2009, and at the time he didn’t know much about the disease. He had a lot of questions…

Luckily, one of his brothers is a urologist, and he was able to provide some answers about what to do next. Evan, his three brothers, and their families rallied around their dad to offer support. And after undergoing surgery as the initial treatment, and radiation as further treatment in 2014, Bob is now cancer-free.

But Evan has continued the fight against prostate cancer in support of his dad, volunteering to help Prostate Cancer Canada*, and even becoming the co-chair of the Plaid for Dad campaign in Atlantic Canada.

Each year, Canadian businesses and individuals pledge to wear Plaid for Dad the Friday before Father’s Day to raise funds and awareness for vital prostate cancer research. The fundraising begins right after Mother’s Day when teams and individuals can begin making their pledges to go plaid at plaidfordad.ca.

Evan says: “Plaid for Dad is a wonderful way to raise money and awareness for prostate cancer. People are proud to wear plaid and show their support for their father, grandfather, uncle, brother. So many great companies and so many great people take part.”

As a volunteer, Evan knows that the proceeds from Plaid for Dad and other fundraising initiatives are being put to good use. He credits Prostate Cancer Canada with helping families get through a very tough time, through a variety of outstanding initiatives. And as the son of a prostate cancer survivor, he knows firsthand that prostate cancer affects everyone – not just men alone, but the family and friends who love them, too. He remains vigilant tracking his own PSA levels, and encourages all men to be proactive about their health and to talk to their doctor about their risk for prostate cancer.

*On February 1, 2020, Prostate Cancer Canada amalgamated with the Canadian Cancer Society, bringing together two organizations working toward a common goal – a world where no Canadian fears cancer. This transformational partnership is a bold and critically needed step forward within the cancer charity sector in Canada. Prostate Cancer Canada’s important work in addressing prostate cancer in Canada will continue as part of the Canadian Cancer Society.