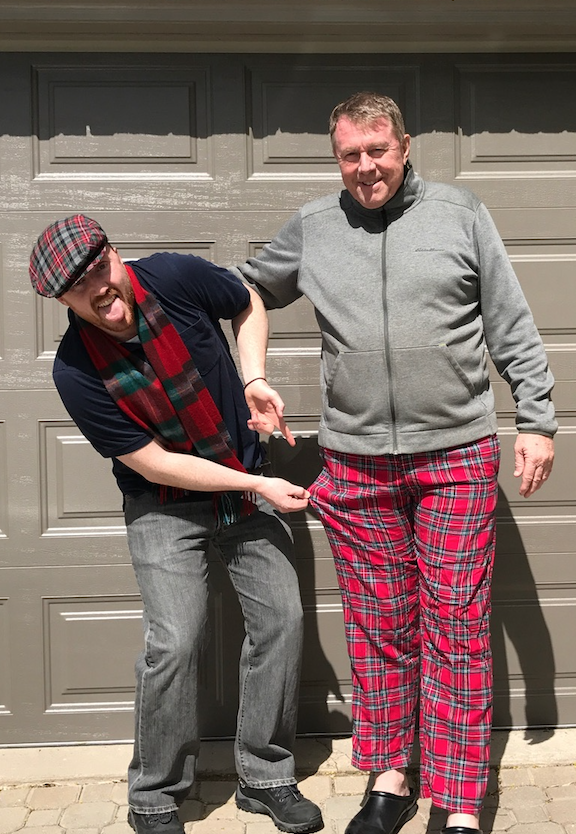 We wear plaid for men and fathers like Ian McFadyen.

Prior to being diagnosed himself, Ian already knew a little bit about prostate cancer. His father had been diagnosed in his late 60s, and since Ian knew his own risk was elevated based on his family history, he’d been keeping an eye on his PSA levels for years. After receiving a negative biopsy a year and a half earlier, Ian was sent for a second biopsy in 2013 when his PSA number started to climb again.

“The bad news is you have prostate cancer – but the good news is it’s treatable.”

Hearing this from his doctor was devastating, but knowing it didn’t necessarily mean that the disease was going to kill him gave Ian a sense of hope.

Thanks to Ian’s understanding around the importance of early detection, he was given several options to consider. Ultimately, he opted to have his prostate removed. For Ian, the surgery was quite an ordeal, and it took some time to recover.

Even after the surgery, however, Ian’s PSA numbers remained a concern, so his doctors decided to follow up with hormone therapy and targeted radiation treatments. He got through it, and these days things are looking optimistic. But he still keeps a close watch on his health. He remains vigilant.

Just like Ian was aware of his heightened risk based on his family’s history, his 35-year-old son is already planning to talk to his doctor about when to establish a baseline PSA number.

Stories like Ian’s are the reason we wear Plaid for Dad and raise money each Father’s Day weekend. No cancer diagnosis is an island. When we come together in support of the men we love, there is no limit to the difference we can make.

Whether it’s with your workplace on the Friday before Father’s Day or with family and friends on Father’s Day itself, join the rest of the country by wearing Plaid for Dad and raising research funds to bring greater hope to the 1 in 9 Canadian men who will be diagnosed with prostate cancer in their lifetime and their families.