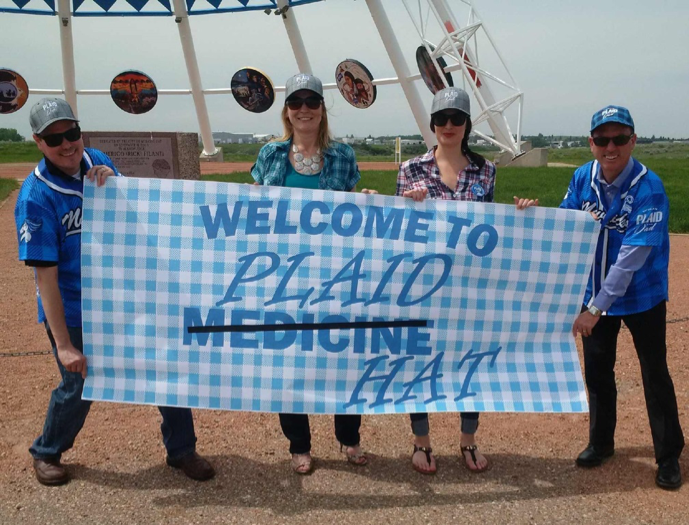 Medicine Hat, Alberta, population 63,000, is proof that when a community comes together, amazing things can happen. The city transforms into “Plaid Hat” every June as part of the Canadian Cancer Society’s Plaid for Dad campaign.

The city’s passion to change lives for men with prostate cancer and their families dates to 2010, when a group of friends created a city-wide team for Movember.

“The team wasn’t just a small group of friends or relatives, it wasn’t corporate,” says Chris Hellman, a founder of the MedHat Movember group. “It was a whole city team that anyone could join, regardless of how much they could raise. We had 117 participants the first year and were a top 20 fundraising team in Canada.”

Chris credits the original MedHat Movember team to Brian Bauman, a local business owner and friend to many. Since his early passing from cancer in 2013, the team has been carried on in his honour by Chris, Sarah MacKenzie, and Brian’s son, Matthew Brassard, a group of local business owners who have created life-long friendships through their fundraising and community efforts.

As the owner of the local Mr. Lube, Chris knows a lot about prostate cancer. Mr. Lube Canada’s president and owner, Ted Ticknor was lost to prostate cancer in 2006 and it is a topic of discussion at work.

“It was a group of friends and acquaintances that turned into life-long friendships,” says Sarah. Her dad was diagnosed with prostate cancer in 2007 in his early 50s, which is why she got involved. “After my dad’s surgery, they tested the tumour and it turned out to be stage IV. If he hadn’t ended up getting help in that timeframe, he wouldn’t be here today.”

The team continued and grew for about eight years, until Chris joined Prostate Cancer Canada*’s Prairies Leadership Council and looked for other opportunities to make a difference.

“In Medicine Hat we don’t have huge buildings like in Calgary or Edmonton where you can put on big events like the Step Up Challenge,” he says. “That’s when Plaid for Dad started and I thought, ‘This is something that we can really get behind.’ We didn’t need tall skyscrapers or a huge population.”

That first year, Chris and his team encouraged local businesses and restaurants to host events and donate funds. The campaign was covered by local media. The mayor and police force became long-term partners. It was a resounding success.

A mainstay since the start is the local Western Major Baseball League team’s Plaid for Dad game. At the Mavericks Father’s Day game, players wear plaid jerseys that spectators can purchase to show their support.