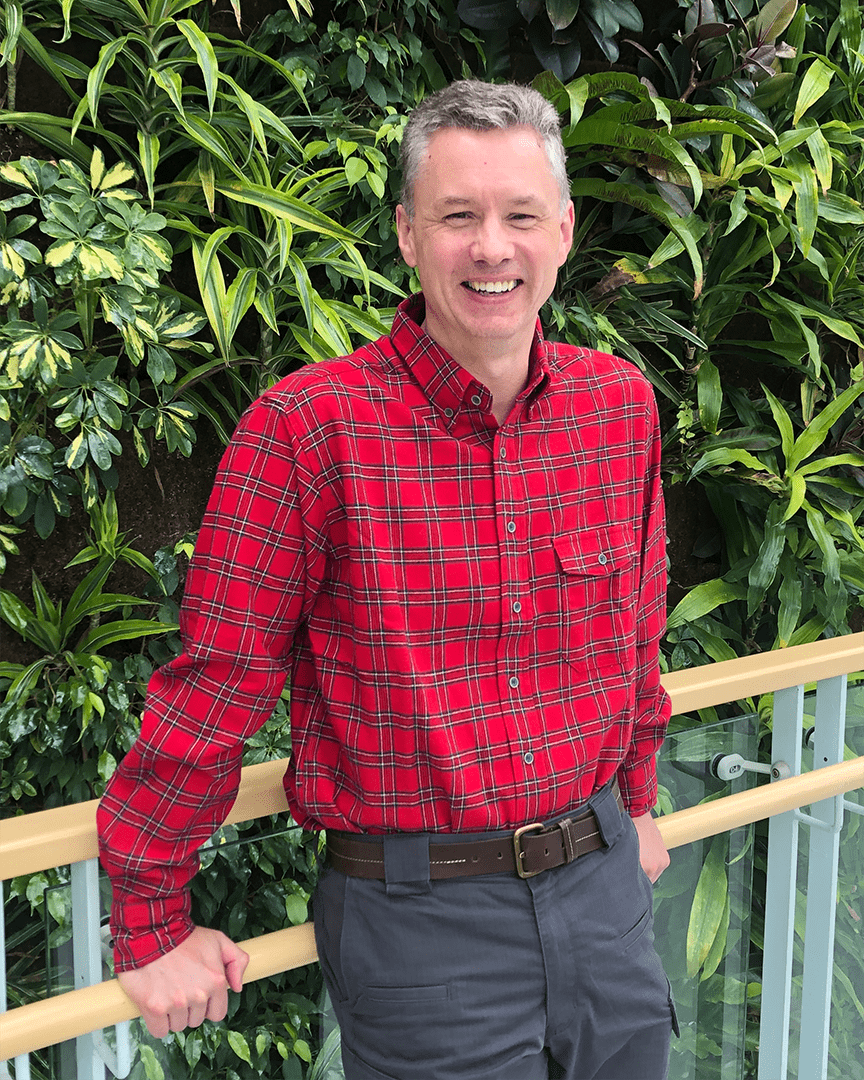 Why do I wear plaid?

To honour dad and remind Canadians that prostate cancer is serious

Rob Thacker, an astrophysicist originally from England’s east coast, is passionate about speaking with others – especially about the seriousness of prostate cancer.

“Because so many people are survivors I think we don’t really take into account how bad this disease can be for those who don’t survive.”

Rob’s dad, Keith, died of stage IV prostate cancer in 2017 at age 77 – so he speaks from experience.

“It’s really simple,” says Rob. “We need to talk about this openly and be clear that this is something you need to get detected early.” Once Keith was diagnosed, he encouraged Rob to talk openly about his experience so that others could learn from it.

Rob came to Canada 25 years ago, in 1994, the same year Prostate Cancer Canada began*. Nineteen years later, in 2013, Keith was diagnosed with stage II prostate cancer. “Like many stories, the initial prognosis was fine. It didn’t go so well from there.”

Doctors found the cancer, not because of tests to help detect it early, but because of urinary problems. He frequently needed to go to the bathroom at night and was so uncomfortable that he finally admitted the need to see a doctor.

Until then, Keith was fit and active. He had never spent any time in the hospital, except to visit friends or relatives.

“He was one of those people who felt this wasn’t going to happen to him.”

After about eight months of radiation therapy in the UK, his PSA levels came down. A year later, things were looking positive. Two years following, he began having difficulty walking. He was sent for a bone scan, but before he received the results, he broke his leg getting out of bed.

“We found that he had really aggressive bone metastases,” Rob says. “They didn’t catch it because it had moved so quickly. His PSA hadn’t responded.”

The cancer had spread to the bones in his thigh, chest, hip and back, and became incredibly painful.

“After he broke his leg, the writing was on the wall.”

Keith wouldn’t walk unassisted again, spending the last five months of his life in a wheelchair while living at home and later in care. Rob and his two sisters took turns flying home to help their mom, who had been married to Rob’s dad for 52 years. Through it all, both Rob and his dad kept their spirits up best they could.

“We would joke,” says Rob. “He would say, ‘Well I changed your diaper, so now you’re changing mine.’ He handled it with as much grace as he could, but seeing your parent crying is one of the hardest things you can deal with. Everyone knows what’s happening and there’s nothing you can do except to be there for them.”

During his last three months, Rob’s dad went into a care facility. The doctors gave him morphine for pain, and Zytiga to slow the growth of the cancer. “It’s ironic that so many things we take for granted, like our digestion, can fall apart when your body is being pumped full of drugs,” says Rob. “In the last few days he really couldn’t think straight.”

Because of what his dad went through, Rob dedicates time to raising awareness by sharing his experience. He has spoken at events to raise awareness and funds for the prostate cancer cause and wears plaid the Friday before Father’s Day to fundraise and get people talking.

“For me, wearing plaid is about trying to make just the smallest difference. Because even if just one family doesn’t have to go through what my family did, I think that’s the biggest thing I can do.”

“Having seen someone go through what I did, I really wouldn’t wish it on my worst enemy,” says Rob. “It’s such a painful condition that it’s kind of become a mission for me to tell people to be aware. As difficult as it can be to have problems down there, don’t let it go on. Go and talk to your doctor.”

*On February 1, 2020, Prostate Cancer Canada amalgamated with the Canadian Cancer Society, bringing together two organizations working toward a common goal – a world where no Canadian fears cancer. This transformational partnership is a bold and critically needed step forward within the cancer charity sector in Canada. Prostate Cancer Canada’s important work in addressing prostate cancer in Canada will continue as part of the Canadian Cancer Society.]